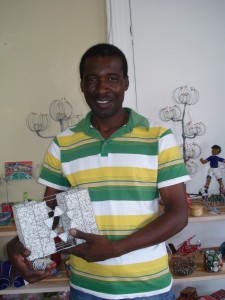 Born in Zimbabwe in 1972, David attended primary school until he completed his 8th grade level. Unfortunately his parents did not have the means to allow him to complete his final two years, so David left school to find work in motor car maintenance. Motor car wires were not his medium, but David had always ‘played around with wires’ (and beads) as a child and so he decided to leave Zimbabwe and try his luck in this craft in Johannesburg South Africa in 1994.

David then made his way back to Cape Town where he worked for Child Welfare, training others and producing chandeliers out of recycled materials. A great opportunity presented itself when he was asked to make up a Chandelier for a ball at the exclusive hotel, Fancourt, in the scenic Garden Route; he was then asked to stay and do all the electrical fittings for all the chandeliers for the ball. David was then invited to work for a company called Source in Knysna and from 2009 -2011 he produced chandeliers out of beads and whatever he could find.

When work started drying out in Knysna, David came back to Cape Town and found his way to African Home. His first product was a chandelier made out of the tops of soda cans. Then came an order to make up chandeliers in the shape of kitchen whisks and colanders and these hang in a beautiful wine estate called Leopards Leap. Since then David has been called to make up large beaded vases based on antique Chinese ceramics and most recently a range of Judaica products including beaded matza holders, beaded Kiddush cups, beaded Shabbat candlesticks, and beaded Tzedakkah boxes.

David’s family, two daughters, his mother, ex-wife and brother, all live in Zimbabwe; he sends money home to them regularly. His motto in life is that he loves new challenges and the chance to learn new things. His versatility shows that he is indeed up to the challenges that beadwork sends his way.

Send a link to your friends